“Dornheggen and her talented ensemble make us care about them.” – Katy Walsh, The Fourth Walsh

“Kathrynne Wolf’s portrayal of the ever present Dr. Martha Cole is captivating and (a) master class on how to be present in the scene.”- Sharai Bohannon, Picture This Post

“Finally, “Play,” the most daunting discovery, features a man, his wife and a mistress (Galvan, Wolf, and Guglielmello) … A fierce and unrelenting “endgame,” they rage against the “hellish half-light” that plagues them as it triggers their manic, machine-gun confessions. No question, it’s a technical tour-de-force: Tyler Garlock’s light cues are perfectly synched with the actors’ pile-driving, barely comprehensible testimony. “Play” perfectly proves that with Beckett tone is as important as content.” – Lawrence Bommer, Stage and Cinema

“The staggeringly delightful cast is comprised of vixens, female and male, most enticing. …Kathrynne Wolf grounds this otherworldly phantasm with breathtaking emotional authenticity in the midst of a stylized asylum of chaos.” -Venus Zarris, Chicago Stage Review

“Having the Fool be a mother who loses her child gives the tragedy a depth it would not ordinarily have, and Kat Wolf’s Fool is a cagey negotiator, a wise and manipulative survivor, and a truly sympathetic and rich character: she is the heart and mind of the story.” – Angela Allyn, Chicago Stage Standard 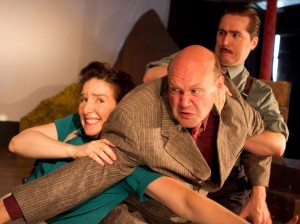 closeted film noir actress) must have endured in the prime of their careers in the 1940’s, The Double naturally concludes with an amazing stage combat exercise involving the majority of the female cast. Here, Kathrynne Wolf practically steals the show as she flips between multiple characters, in a sequence bordering on comical brilliance, with stylistic panache.” – Sheridan Road Magazine 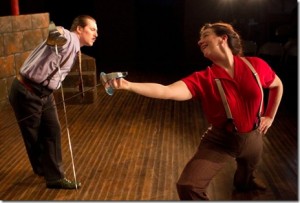 “Because it’s Babes With Blades, there are fantastic sequences of dueling. Two in particular are most memorable. Brendan Hutt (George) and Kathrynne Wolf (Shirley) use the joust as coy foreplay. It’s a lovely, romantic skirmish. Later, in the showcase piece, Wolf plays the entire Mexican army. Wolf uses her physicality for impressive slapstick.” -Katy Walsh, Chicago Theatre Beat

“… delicious swordplay sequences designed by Libby Beyreis, in particular a climax in which the astonishingly agile Wolf plays all the Spanish invaders besieging the French army.” -Kerry Reid, Chicago Tribune 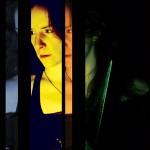 “It has been quite some time since I have seen a stage performance as exciting, engaging, and as well performed as Babes With Blades rendering of Macbeth… What made this performance was the cast… Macbeth offers intrigue, excitement, and tragedy, and this cast delivered that–in spades. I found myself leaning forward in my seat, totally engrossed in the action, hanging on each word between each actor in every scene. The acting is a wonderful mix of physical and emotional; the sword play was excellent (and not overdone); the actors created emotional believability with their characters and the interaction between them was very believable. I was upset when the play stopped for an intermission, and paced around impatiently for fifteen minutes until it resumed.”— Norman Doucet, Gapers Block

“Particularly enthralling is the relationship between Macbeth (Kathrynne Wolf) and Lady Macbeth (Nika Ericson), whose passionate embraces slowly turn to shimmering fury as the consequences of their greed conspire to destroy them. Add broadsword battles and a body count that rivals “Kill Bill” I and II and you can at least somewhat piece together an image of the flinty, emotional brutality that this play possesses.”–

“Kathryn(ne) Wolf is a gifted Macbeth. She displays swagger with restraint and inner turmoil with conviction… and the dedicated cast create a thrilling world of exciting swordplay. From fighting individuals to two gangs going at it, the girl-on-girl steel-on-steel is exceptional..” – Venus Zarris, Steadstyle Chicago 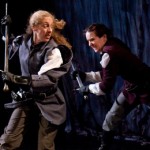 “… in the end, the showdown between Macbeth and Macduff (Amy E. Harmon) was so anticipated and so well executed, it received its own applause.

…the scenes between Macbeth and Lady Macbeth potently render, in agonizing increments, their relationship’s progressive disintegration. This production does not overplay this couple’s sexuality, yet illuminates their essential, integral partnership, before, during, and after their downfall…

The action and pacing never flags.. One can be assured of a thrilling demonstration of women’s strength and ensemble unity in the delivery of this classic tale about the battles within and without the human soul.”  -Chicago Theatre Blog, Review by Paige Listerud Posted May 3, 2009

“Wolf keeps Macbeth constantly roiling just under the surface. She plays an amazing game of psycho-emotional Russian roulette throughout the performance. Kathrynne Wolf is fearsome with a sword as well.” – Chicago Stage Review by By J. Scott Hill 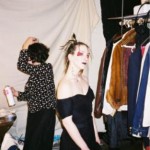 “Interrupting the action are the musings of a modern-day woman, Zillah (played with dead-on perfection by Kathrynne Ann Rosen”.  Kushner wrote the play as a stab at Reagan-era politics and Reagan’s virtual dismissal of the AIDS epidemic.  Here Zillah is haunted by a nightmarish connection to the events referred to onstage as well as slinging zingers toward the current Bush administration.”- Mary Houlihan, Chicago Sun-Times, June 19, 2001

RUMORS
“The show’s best acting comes when guests Glen and Cassie Cooper (Robert Kimmeth and Kathryn(ne) Ann Rosen) have the stage to themselves…The unhappily married couple convincingly flesh out all the tension in a relationship in which both suspect and accuse the other of infidelity – along with slapstick violence, a key ingredient to farcical comedy.”
– Forrest Cates, Daily Herald

“The cast is wonderful, individually and in ensemble… [Prospero] needs the intriguing and
imaginative Ariel (Kathryn(ne) Ann Rosen) to carry out his spells.  Flitting about the stage with her light step and light-hearted voice, she’s a bewitching character and an enthusiastic servant who teaches her master the lessons of forgiveness and generosity.”
– Melissa A. Erickson

“Turning in an intelligently acted performance that grabs the audience’s empathy is Kathrynne Ann Rosen as Suzy Hendrix, a young woman who has recently lost her
sight but is making valiant strides at overcoming the disability.
Rosen’s preparation for the role is apparent…  She makes us believe her vulnerability and her strengths as she compensates with a nimble brain and astute reliance on her remaining senses.”
“The final confrontation between Roat and Suzy had some audience members screaming at the press night performance.”
-Renee Tomell, Pioneer Press

“Simply stellar performances were turned in by Kathrynne Ann Rosen [and supporting cast]… No, she is not blind in real life – she just played this part so darn well.” 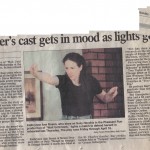 “There is nothing wrong-headed about the performance of Kathrynne Ann Rosen, who stars as Suzy Hendrix, the frail victim who gains courage and concentration even as her assailants tighten their noose…she packs the climactic showdown, with the worst of the crooks on the darkened set, with eerie spasms of hysteria bound to satisfy any and all connoisseurs of fright.”

“Warren Leight’s tightly etched “Nine Ten” draws hilarious portraits of five citizens, a spiritual dancer, a young slacker, a heated socialite and two Wall Street types who all wile away the minutes while waiting to be called for jury duty.  In this little gem filled with keen observations, all five actors do near-perfect turns.”
– Mary Houlihan, Chicago Sun-Times June 7, 2002